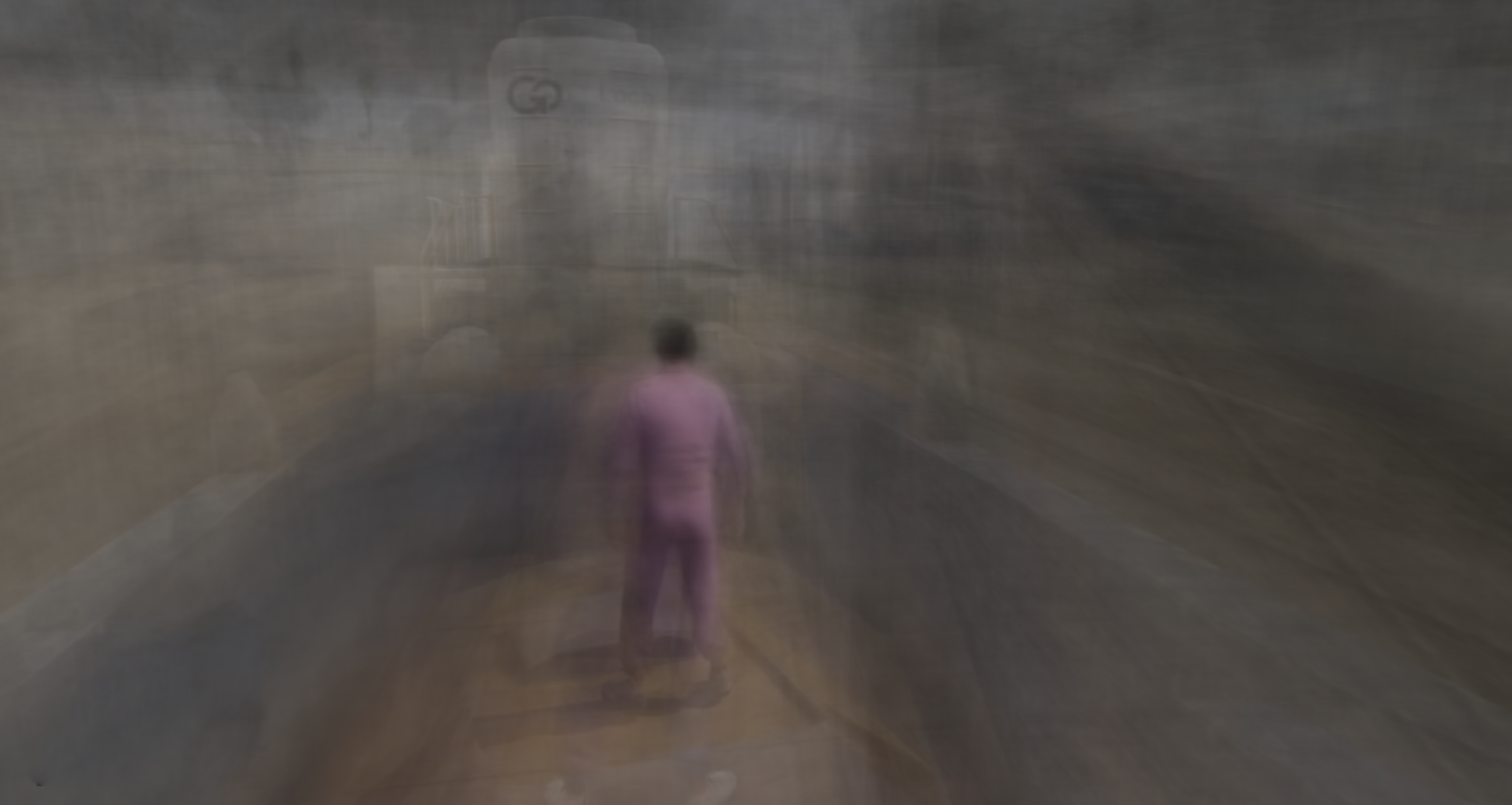 While Grand Theft Auto and German Romanticism may seem diametrically opposed, artist Claire Hentschker describes how the desire to capture the sublime potential of nature through an idealized scene transcends the ages.

Rückenfigur, literally “back-figure” in German, is a compositional device that was often used by Caspar David Friedrich. In Friedrich’s painting Wanderer in the Sea of Fog, the viewer is invited into the composition through a figure in the painting’s foreground that serves as surrogate for the scene. We see the back of the man’s black coat as he stands atop a rocky terrain before the grandness of the sea, horizon, and sky before him. The man gazes into sublime nature, and through him—this Rückenfigur—we, the viewers of the painting, become immersed in the setting and can witness his grand view of the landscape with our own eyes, as if through the back of his head. Grand Theft Auto V presents a similar opportunity for immersion into a landscape by way of an avatar with its back turned—a digital Rückenfigur of sorts.

Owning and playing Grand Theft Auto (GTA) is not the only way to experience the majesty of a digital world that has been created to encapsulate the narrative of the game. Many individuals participate in the YouTube economy of posting and watching videos of gameplay. Such documentation videos are frequently recorded in third-person mode, characterized by the back of an avatar at the center of the screen through which the player navigates the world. With this perspective, the landscape shifts while the avatar remains relatively fixed in the foreground of the scene. Unlike in Friedrich’s world, the Rückenfigur through which we experience the GTA landscape is not necessarily human. There are third-person videos to be found featuring any or all the following protagonists: bikes, cars, trucks, trains, motorcycles, blimps, helicopters, boats, and even all-powerful and immortal deer. (The latter the result of a fantastic artwork by Brent Watanabe.)

The desire to capture the sublime potential of nature through an idealized scene may have begun with Friedrich, but it transcends the ages, as evidenced in the names of uploaded gameplay videos. Excerpts entitled GTA 5 Sunset, GTA V: Beautiful sunset flight, Grand Theft Auto V—The Drive Through The Sunset, GTA 5—Beat The Sunset: A Drifting Montage, only begin to scratch the surface of the vast amount of video recorded by one player’s avatar’s experience of the same algorithmic sunset. These videos consistently feature comments by viewers expressing their gratitude for the video and their shared appreciation of the beauty of the landscape. For example, viewer GTAgreat says, “Good job. Sunset is breathtaking :OOO.”

“I want to investigate Grand Theft Auto as a subject of art that transposes Caspar David Friedrich’s subjective Romanticism to the digital age.”

In this series of works, I want to investigate Grand Theft Auto as a subject of art that transposes Friedrich’s subjective Romanticism to the digital age. I am particularly interested in working with videos that other players have already deemed important enough to share. This collection provides a sampling of GTA’s digital world that incorporates both the gaze of an avatar and the eyes of a living viewer encoded into the experience of the scene. The view and the location presented around the avatar is a representation of what a single player decided to record and share.

To create the images in the series, I employed a technique called “image averaging,” notably used previously by artists such as Jim Campbell and Jason Salavon. The average of a series of digital images is calculated so that the more consistent characteristics shared by the images are rendered in greater detail. In this case, I was using video frames from YouTube videos of GTA gameplay. The game’s avatar, consistently encountering the world around it, remains a constant presence on the screen and is therefore rendered in more detail than the surrounding world. As the world passes by, the avatar remains virtually unchanged, and the contrast between the more realized avatar and the blur of the shifting landscape becomes evident in the resulting images. Each image is the sum of someone’s desire to share an imaginary world through a gameplay video. And, as Sammy R—in the comments section of one of these videos assures us—“This is Art.”

Claire Hentschker is an artist and current graduate student at Carnegie Mellon University. She is interested in site specific mixed reality, and her virtual reality work has been shown at the Carnegie Museum of Art, VIA Festival, and the Free State Festival.