Play has been a major part of my life for as long as I can remember. Before I started constructing crossword puzzles, I played with everything from jigsaw puzzles to Hot Wheels cars. I especially loved word games like Scrabble, Super Scrabble, and Jotto, so my eventual crossword obsession wasn’t too much of a surprise! Now that I’m older, play plays (pun intended) a huge role in every crossword puzzle I make. Perhaps the best way to illustrate that is to walk you through how I constructed this puzzle.

My inspiration was actually a comic strip called Baby Blues, in which the two children in the strip’s regularly occurring family of characters have combined chess, Monopoly, Candy Land, Mousetrap, and other board games, as one of them exclaims, “How many Yahtzees does it take to sink a Battleship?”

This strip had me laughing out loud—what a preposterous mixture of board games! “Wait a second,” I remember thinking, “a mixture of board games … a puzzle I’m building for an exhibit about play … playing with board games for wacky results … classic rebus puzzles … maybe I’m onto something here!” My brainstorm started with the games in the comic. Queen Frostine is from Candy Land, so how about reparsing “Candy Land” as “c and yland,” forming the rebus clue “CYLAND”? Not a bad example, but also not a “Wow!” in my mind since so many of the letters (Y, L, A, N, and D) don’t get played with.

After a few more false starts (not much I could do with CHESS, and none of the ideas I had for MONOPOLY worked out to my satisfaction), I noticed Mousetrap. Aha, what about making a literal mousetrap? When I noticed I could clue MOUSETRAP as “Ope[rat]ion,” another board game, I was off and rolling.

One thing I really like about this idea is how each theme clue is a mini-puzzle of its own, thus focusing more heavily on play than a traditional crossword would. For those of you who are still puzzled, here’s a breakdown of the theme clues:

Ope[rat]ion = a mouse trapped in a longer word = MOUSETRAP

TLARH = the letters LA next to the letter R, all of that surrounded by the letters T and H = la by r in th = LABYRINTH

Once the theme was in place, I moved on to the fill. To me, filling a crossword puzzle is a form of group play: I want to make sure everyone is having a good time by sprinkling in liveliness (which I tried to do with entries like SHRAPNEL, CIABATTA, and CHINWAG), while at the same time keeping obscurity and uninteresting entries to a bare minimum. When I’m stuck using a weak entry, I once again focus on solvers. Nobody’s going to love PAO (clued as “Kung ___ chicken”) or BOK (“___ choy”), but on the plus side, these trade-offs are relatively easy fill-ins and give newer solvers toeholds. “Crosswordese” trade-offs like oast (a hops-drying oven) and amah (an Asian nanny) are to me the worst kinds of entries since they’re neither interesting nor inferable. I avoid such entries as much as possible, because they seem like foul play.

Some of my favorite pun/misdirection clues here are “Kind of board used for spelling” (OUIJA), “You might skip them” (STONES), “Glass on the radio” (IRA), “Pitch perfect?” (IN TUNE), “Leftmost member of a violin quartet?” (E STRING), and “They’re in the singular” for ITS. But it would get annoying and tiring if every clue were a pun. My philosophy on clues is to make them playful but not obtrusively so. 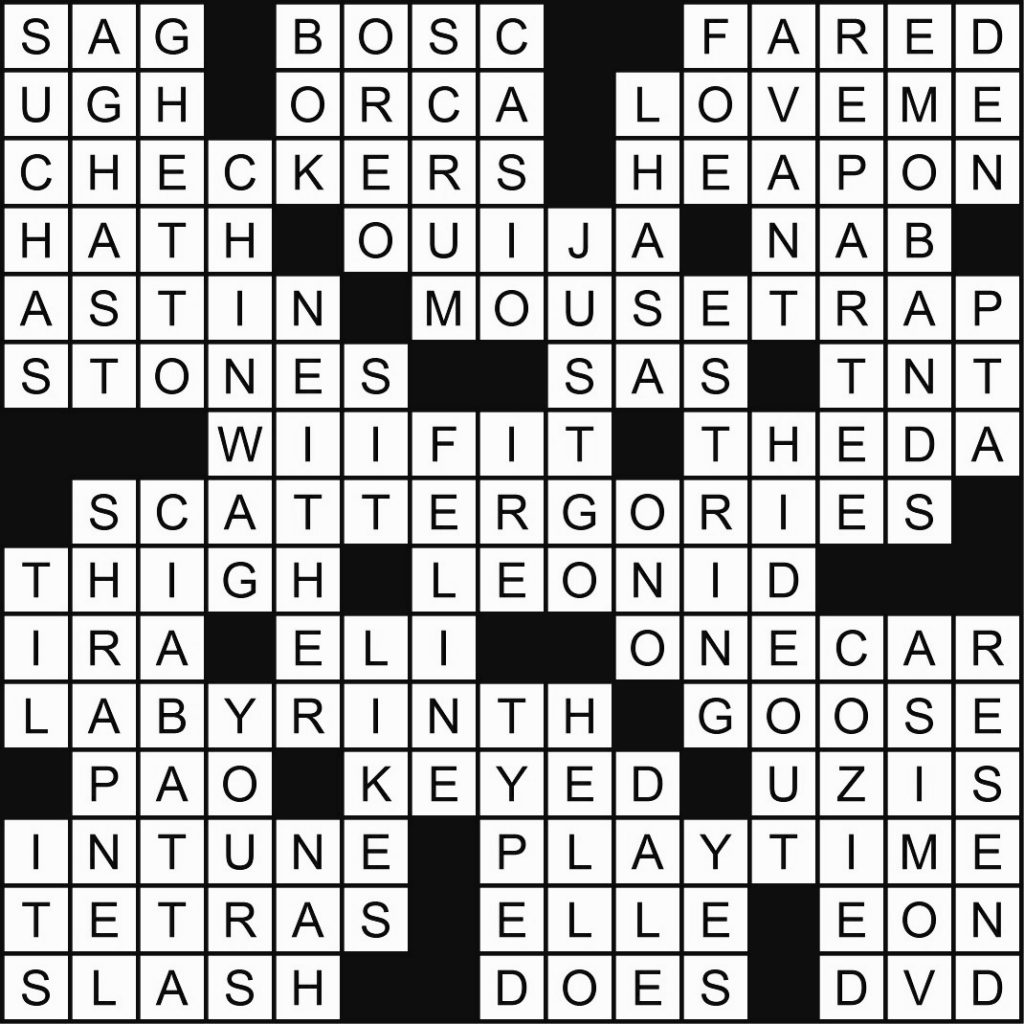