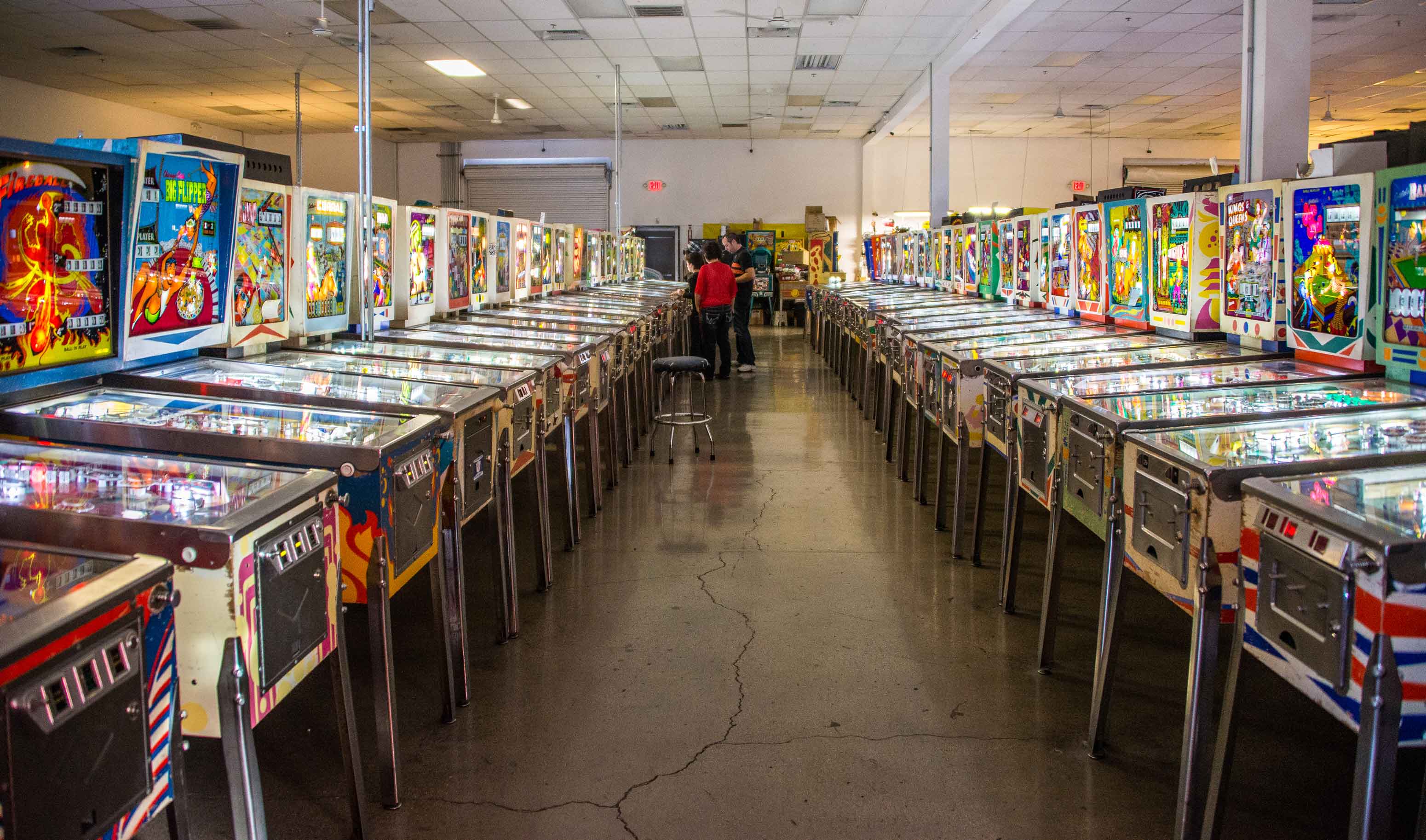 Digital devotee Virginia Heffernan finds herself seduced by pinball and the wonders of the arcade.

In the middle of the journey of life, I found myself astray in a vast executive conference center, my pulse ramping up as it can during weekends of airports, strangers, and vertiginous hotels cold as meat lockers. I was trying to avoid a tech conference. I aimed to look intent on something, improvising a straight path, though all I was really looking for was an armchair where I could be alone with my phone.

Down one hall and up the next was nothing but evidence of other conferences: still lifes of coffee and KIND bars flanked by signs announcing plenary and breakout sessions on subjects ranging from—well, the one I remember was “Rendering.” Horses to glue. But it wasn’t as simple as that; rendering had made giant strides.

At last I found what it turned out I’d been looking for all along: an arcade. Dated, neglected, this oddly shaped chamber, lined in cola-stained linoleum contained maybe seven gaming machines, three of them lightless and lifeless. It was a floor down, visible through a slanted window, two glass doors away from a swimming pool. I zagged around and burst into it.

Over the last twenty-five years, the Internet has doggedly modeled for us a strange but familiar truth.

A vintage machine offering the holy trinity of nostalgia—Ms. Pac Man, Asteroids, and Centipede—presented itself as melancholia too picked over. I admired a bulky game with a low-slung vinyl seat that turned out to be an entry in the Cruisin’ World driving-game series. In this one, you could zoom perilously through the gold-beige light of the Pont de l’Alma tunnel in Paris, where Princess Diana died.

And then there was a pinball game. I love pinball. I was dressed in a sleeveless khaki summer dress and pumps for my own morning plenary session, a panel on the scourge of ad-blocking software for business. But I decided I’d play pinball better out of heels, so I kicked them off. Bare feet allowed the minor transgression of naked soles on cold linoleum sticky with RC Cola, a welcome taste of the unsanitary in a prison of antisepsis.

A clattery token machine took my $10 bill and returned fistfuls of chances. I sized up the game. We’d be at it a long time. The conference session I was skipping (“Does Hollywood Need a Hard Reboot?”) faded from memory. Token in. The swallowing sound of the game accepting my opening sally—not fighting it—and coming alive, suggested that the pinball table, with its Monopoly theme, had been waiting for me. Presiding over my detour to belled and blinking Atlantic City was Parker Brothers’ icon of cheerful avarice, J. P. Morgan made cute: Rich Uncle Pennybags.

My fathom-long body, as the Buddha called it, returned to me as I stood before Pennybags. It had been gone a long time. Monopoly-themed pinball would seem to be an unlikely agent for this physical homecoming, but those homecomings are rare for me and I’ve decided that when they come it’s stupid to reject them.

Now the central nervous system flipped to automatic, but also to a kind of insensate virtuosity (remember: a deaf, dumb and blind kid sure plays a mean pinball). Without will, my palms worked the flippers to keep balls in the game, and after losing one—shucks—my brain (left? right?) registered with satisfaction the next one’s self-reloading, a mechanical caddy getting me just what I needed when I needed it, and then the suspenseful exertion of pulling back the spring-loaded plunger against its non-negligible resistance, noting the partial unspooling of the spring, touched with rust, and then of course the release.

Over the last twenty-five years, the internet has doggedly modeled for us a strange but familiar truth. Our lives are both here—in our beating hearts, in our thick-skinned, small-boned feet, in our despised fat, our buzzing brains—and elsewhere, in a fathomless realm channeled through our phones that we can but dimly intuit.

The first thing you notice with non-digital games is all the disreputable excitement possible with mere mechanics and electricity.

A conference space free of natural light or breezes is the ideal non-place to feel neither the richness of our bodies, nor the kaleidoscope of the internet, but only the uneasy suspension that comes from being monotonously tweeting and texting while walking, soundless steps on carpet that mutes our heft and gait. Now, as my game heated up, my phone sat on the ledge of a radiator by the soda machine, using its amoral programming to case the joint for open WiFi, casting about for signals like a hophead, still warm from my excessive attention to it. Dancing attendance on my phone, while pretending it is dancing attendance on me, is a charade I need long breaks from. Today pinball was my interlude.

The Monopoly-branded playfield was fundamentally non-digital, though I should add that I didn’t dissect it. I wanted my analog illusion, from a game launched barely after the millennium’s turn. I was willing to repress all evidence of even electronics, so profoundly did I want reprieve from nonlinear signal processing.

The first thing you notice with non-digital games is all the disreputable excitement possible with mere mechanics and electricity. The pinball “interface,” such as it is, doesn’t screen you out from its greasier machine parts, the way Apple has taught us hardware must. Being closer to grease means being closer to the sordid and further from the embalmed interfaces made up as if by a mortician: Apple, Google, Facebook—further from, let’s say, the lies. Mechanics don’t lie. The madness of our living, dying, jamming, clogging time on earth is laid bare in a carburetor. Mechanics worked well on this pinball table because Monopoly, with its theme of greed, is not a wholesome story. There’s something in rusted springs and leering monopolists that belongs in the half-finished basement of a cathouse, as entertainment for the preteen sons of sex workers eager to forget the corruption around them without outright going to church.

Springs, plungers, tilt sensors, bumpers, holes. I played and played till my wrists ached. Every time a ball hit a bumper and the machine trilled with points, my person thrummed harder; if the ball ricocheted against the bumper and the points racked up—these sounds must have organic analogs in the blood vessels—I felt as if time stopped, I was for that throbbing instant immortal and, better yet, had no end of appetite for winning. Also, I was in the world and screened out. Things were in three dimensions and took up space. Non-LED light was produced by things big enough to make light: candle-sized, torch-sized. And balls hitting bells might have happened in the Middle Ages.

A harmonious experience is analog pinball—un-uncanny.

Check out the second part of “Tilt” here.

(Image credit: The Pinball Hall of Fame by Kent Kanouse on Flickr.)

Virginia Heffernan is a journalist, author, and cultural critic. She is currently a contributing editor at Politico, co-host of Trumpcast on Slate, and a columnist at Fast Company. Previously, she wrote “The Medium,” a column on internet culture for The New York Times Magazine. Her most recent book is Magic and Loss: The Internet as Art.